The thing is i have been using webpack since alpha.43 or so, so my project is basically binded to webpack, if the npm scripts trigger rollup then we need a version for webpack, right? just like the gulp one had scripts for webpack with ionic-gulp-webpack.

I think you would be interested in following ionic-app-scripts #16.

I only have 11 components and a boot time of around 10 seconds. My app is relatively simple just a few form fields per page. I’ve never seen lag from page to page but my startup time is terrible. I noticed no improvement moving to RC0 which involved me creating a whole new project and moving my pages into the new structure.

MyApp.ts is empty other than a simple menu with 5 pages as well as a slides page.

I’d like to add that my startup time on windows 10 chrome browser is instant… it is Android that takes 10+ seconds.

Have you tried to deploy in production mode? that should allow you to use AoT which is the main improvement over load time and performance in general.

Other than these… I have done thing else. Is there a way that I can get if AoT is working?

Why Cordova if you’re using Ionic?

I was following this guide?

What should I use?

Hmm aside from the cordova build --release android thing it is as i publish my Android and IOS app versions.

For now try the ionic cli to build, tomorrow i’ll be attempting the update to RC.0 and i’ll be messing with Rollup (from webpack, i’m very sad to let webpack go).

I’m giving it a try now… Upgrading to Rc0 was unusually difficult for me. I hit a few bugs that caused me significant pain until I isolated them. Hopefully I’m in the minority there. Make sure to back up and good luck.

The ionic build has a partial fail… Seems like another bug. It builds the APK but fails to update the manifest. Who knows what else it missed Checkout the strange remark about IOS below:

try ionic build android --release
Haven’t look up any information about this though, but this is the case when I update my NPM and try to build on older beta.11 project I have to put --release tag after ionic build [platform]

Seriously? the ionic cli care about flag order or position?

@keeper3000 Off course i back up, that’s what Git is for, if any developers aren’t using it today then they’re doing it wrong.

Also @danbucholtz in the Ionic team is documenting the issues Rollup has with any given library like for example Moment, Chart.js and a few others that people has reported, at the end of the issue #16 on ionic-app-scripts @danbucholtz posted the uri’s for such docs on Rollup quirks.

It did in my case… I guess they set default to iOS build if no platform defined. In this case platform must be placed after build tag. 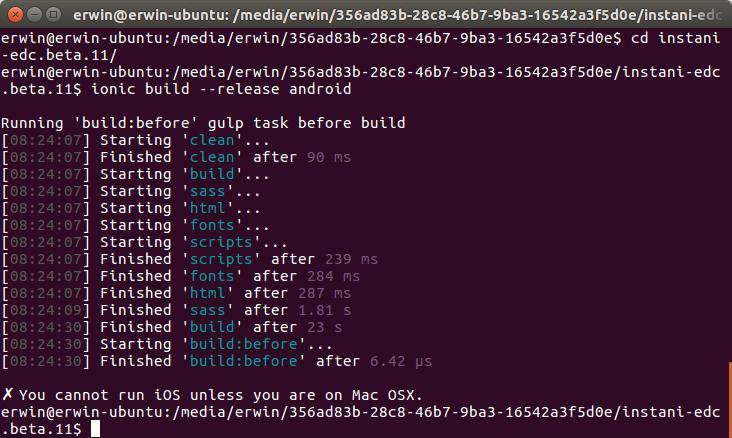 As I already wrote my app with RC.0 take like 6sec on Nexus 5X to start.

Furthermore I could add to that that I’ve got around 100 typescript files/classes of my own in my app and I’m using around 15 cordova plugin including vkwebview and walk and around 10 third node_modules libraries.

Thought might be good to compare these facts too.

@bondraenko @wienzzz it is irrelevant to post for beta11 - try first to migrate to RC0. A lot of performance issues has been solved there.

I know, that’s why I said old project

Since the old project is “released” already in my company, I can’t alocate time to migrate it to RC.0 at this moment (after reading lots of documentation and forum about RC.0). on RC0 I only serve it on the web using ionic serve command… haven’t try to build it yet